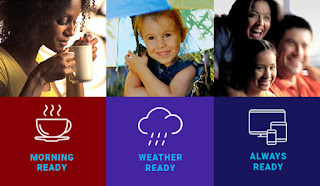 DALLAS, TX – Stephen Arnold Music, the World Leader in Sonic Branding, has announced the launch of “Ready.” Featuring multiple themes of “Morning Ready,” “Weather Ready” and “Always Ready,” the campaign is the latest in a series of comprehensive audio and video offerings from Stephen Arnold Music, providing local TV stations with a cost-effective marketing toolkit.

“Ready” provides stations with full 360-degree coverage of a station’s strongest brand silos – morning, weather and news. It engages viewers across multiple platforms, empowering them to be prepared throughout their day. Optimized for broadcast, mobile, online, and social media, “Ready” pairs three versions each (Always, Morning, Weather) of two memorable original songs combined with relevant video, reflecting the confidence viewers feel by being 100% ready for whatever comes their way.

“Audiences today interact with their favorite local station in so many ways – via their phone, online, and across multiple social media channels,” Chad Cook, Vice President, Creative for Stephen Arnold Music, says. “The diverse messaging of ‘Ready’ creates a comprehensive connection between stations and their audiences, anytime and anywhere.”

Featuring different verse/chorus/bridge lyrics within addictive pop songs, the multiple themes of “Ready” allow stations to evolve their campaign, with staged rollouts of “Morning,” “Weather” and “Always” over months or years. All versions of the song packages include Full Song/60s/30s/15s/10s/IDs, along with full sing, donut, tag and instrumental mixes, plus an instrumental “Severe Weather” theme. Stations can also collaborate with Stephen Arnold Music on custom lyrics for their market.
Following the success of previous integrated campaigns such as “Everywhere I Go” and “Waking Up My Day” from Stephen Arnold Music, “Ready” is oriented from the viewer perspective. The lyrics and imagery focus on feeling fully prepared by their local station for the fast-changing developments of each day. From “Always Ready:” Whatever's making headlines/Whatever's going on in the world outside/Yeah ya keep it coming on time/Ya keep me in the know anywhere I gotta go/And as long as you're within my reach/Yeah ya give me everything I need.../I'm always ready/Anytime anywhere/I’m always ready.”

As the World Leader in Sonic Branding, Stephen Arnold Music has helped define the brand identity for such clients as CNN, Fox, ESPN, AXS TV, CCTV, and local stations in 75% of all US TV markets.

About Stephen Arnold Music:
Often referred to as the most-heard, least-known composers in America, Stephen Arnold Music’s creativity is experienced every day in more than 100 million homes throughout the U.S. Based in Dallas with offices in San Diego and New York, with additional recording studios in Santa Fe, “The World Leader In Sonic Branding™ has more than 20 years of success delivering impactful, brand-defining music that makes a difference for today’s top broadcast networks, cable channels, television stations, film production studios and advertising agencies. With multiple Emmys, Addys and Promax Golds to their credit, Stephen Arnold Music’s specialized approach and commitment to the power of sonic branding, state-of-the-art production and unparalleled customer service is at the core of its promise. Stephen Arnold Music continues to set the creative bar in a highly competitive content landscape.

For Wolk, the additions of Logevall and Miller represent a continuation of the values that he founded the company on, which are succinctly summed up in their corporate philosophy: “Defend The Story.”

“’Defend the story’ simply means putting the creative ahead of everything else – ahead of money, profits, margins,” Wolk says. “As one creative director told me, Spears & Arrows combines new school thinking with old school values. For me, that was a huge compliment. That’s exactly what I set out to do when I launched the company 2014, and it’s why we wanted to work with both Robert and Josh.”

Robert Logevall:
Logevall brings his singular sense of design and film composition to Spears & Arrows, following stints at production companies Supply & Demand and Anonymous Content. Originally from Sweden, Logevall began his creative career in Canada working as both an art director and production designer in film and television.

As a commercial director he brings that same sense of graphic design, detail and filmic composition to his work, which at times recalls such filmmakers as Wes Anderson and Spike Jones. His visual style is perhaps best exemplified in his Fiat spot “Immigrant,” a whimsical montage of various Fiat’s driving into the waters around Italy and arriving on American shores to highlight the brand’s reemergence in the U.S. market; and Chrysler’s “Life Evolves,” which effectively uses a split-screen to highlight two distinct stages in a man’s life and the car’s that bridges them.

“Robert is famous for his unique twist on the auto spot,” Wolk notes, “but he is much more than your typical “car guy.” His spots are always very composed and graphic thanks to his production design background. His eye for detail and sly wit have made him a favorite not only in Detroit, but agencies worldwide.”

In addition to his commercial work, Logevall recently wrapped shooting his second feature film, “American Pets”, as well as a short film, “Kim and I.”

Josh Miller:
Miller began his career as an agency copywriter working at such top creative shops as Kirshenbaum Bond + Partners and Hampel Stefanides. He worked as a creative director at Cliff Freeman & Partners and Team One Advertising, before launching his own directing career that included stints at RSA Films, B-Reel Films and most recently Humongous Production.

With a sharp wit, coupled with an innate ability to craft memorable stories and characters, Miller’s best work highlights his singular abilities to mine comedy through performance, as in his Klondike spot “Good Listener” and Target ad “Neighbors,” which expertly captures a cringe-worthy awkward exchange of holiday presents between two young couples.

“Josh’s agency creative background is a huge plus, he understands the pressures agency producers and creatives are under with their client relationships, and what the team is up against in general,” Wolk says. “He’s able to offer creative solutions that work for everybody, and always without ego.”

Beyond commercials, Miller currently has two series’ in development at Comedy Central; one based on his award-winning short film, "Hand Job: Portrait of a Professional Male Hand Model."

Busy Roster:
In addition to the new director additions, Spears & Arrows other directorial talent has had a busy start to 2017.

• Don Broida just completed work on the launch of the Spectrum brand, formerly known as Time Warner Cable via agency Wilson RMS, and just completed a spot for eBay with Digitas.

“My directors are my partners and we have to be able to work together in today’s creative economy,” Wolk notes about the changing relationships between brands, agencies and creative production company’s like Spears & Arrows. “That means working with our clients to provide solutions that crush it creatively, but are fiscally responsible. We prioritize the interpersonal relationship because it is not a numbers game for us, and anything we can do to stand out from the competition we will do, which is why I am very deliberative when it comes to who we work with.”

Wolk adds, “The whole business has changed -- there’s less work, for less money that needs to be done quicker, but with even greater expectations. The days of an agency producer simply handing a board and a budget to a director are long gone. For us, every job is precious and a chance to do something great, which is why we treat every job as if it’s our last.”

Spears & Arrows is represented on East Coast by Mary Eiff and Michelle Stuart of Hello Tomorrow (www.hellotomorrow.tv); Brad Grubaugh and Sophie Moore of Goodrebel (www.goodrebel.tv) on the West Coast and Texas; and in the Midwest by Nikki Weiss-Goldstein of Nikki Weiss & Co (www.nikkiweissandco.com).


About Spears & Arrows:
Like, Honor & Passion, Excellence & Inspiration, we are a team that values the balance and blend of best practices with the best talent in commercial production. http://www.spearsandarrows.tv/

“For the compositing effect to work they needed to appear to be speaking to each other and lit by the same light in the scenes,” Wayne Brejcha, Calabash Creative Director says. “Additionally, we needed to make Charlie his usual charming self, and create a photorealistic StarKist product that Candace grabs from his nimble little fins. To make all those elements come together was an exciting creative challenge for the studio.”

Each of the two new :15s feature a different side to Bure’s busy life and how StarKist’s Tuna & Salmon Creations® single-serve pouches fit into it, whether at work as in the spot “Action Candace” or at home as in “Making Lunches.” Both feature Charlie dropping in (quite literally) on a hook to chat with Bure and offer some tasty lunch options.

For Calabash Executive Producer Sean Henry one of the key animation challenges the new work presented was the CG model rigging that required a considerable amount of thought to give the animators enough control to match the poses conceived by agency creatives.

“The animation required a lot of corrective blend shapes in the final polishing stage,” Henry notes. “Our team of 2D and 3D animators did a great job merging the styles to come up with something that manages to bridge the gap between 2D and 3D while staying true to the character.”

Henry adds, “Acting with animated characters can be a challenge for some actors, but Candace was fantastic. The old shtick was always that Charlie wanted to be a star, so I guess he's coming up in the world. Spaz is a dream director for animation because he knows both animation and filmmaking, and how to get every shot to connect with viewers.”

For Williams, who in addition to directing numerous ads played an instrumental role at acclaimed visual effect house Industrial Light & Magic, working on such early groundbreaking feature films such as “The Abyss,” “Jurassic Park” and “Terminator 2: Judgment Day,” notes that while Charlie has evolved over the years, the key with this project, as well as the previous StarKist spot he directed, was the role of Calabash.

“These guys are one of the best animation houses in the country,” Williams says. “Their animation skill in both classical and computer graphics is fantastic. They are character and performance guys first. They’re not a huge, bloated shop – rather a small family of artists who understand attention to performance and look.”


About Calabash Animation:
Led by Creative Director Wayne Brejcha and Executive Producer Sean Henry, Calabash Animation is the Chicago, IL-based animation production studio known for its award-winning animation for the advertising and entertainment industries. Calabash Animation is perhaps best known for their creative character animation and development of some of America’s most beloved brand icons. In addition to it advertising working, the company has also produced several acclaimed short films, including ‘’Stubble Trouble,’’ which was nominated for an Academy Award in 2002.

About quench:
A boutique agency made up of more than 70 food & beverage zealots, operating out of three offices in Harrsburg, Philadelphia and Chicago.  We have big-agency capability combined with boutique agility. http://www.quenchagency.com