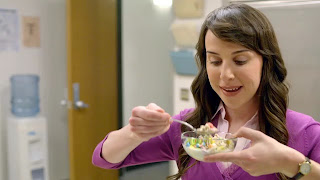 CHICAGO, IL – Tapping into the kid inside every adult, Calabash Animation, the award-winning animation studio led by Creative Director Wayne Brejcha and Executive Producer Sean Henry,worked its animated magic on a new ad targeting adults for General Mills’ Lucky Charms cereal. Created by agency Saatchi & Saatchi, New York, "Transportasty" features a busy office worker whisked away to an enchanted forest by just one bite for a chance encounter with Lucky the Leprechaun.

"This spot touches on nostalgia for one’s own youth – a simpler time when a bowl of Lucky Charms and Saturday morning cartoons were the highlight of the week," Henry says. "It was fun idea because the truth is kids aren’t the only ones who love Lucky Charms and this spot gets at that idea in a smart and cinematic way."

Blending 3D animation and live action photography, "Transportasty" (:15) opens with an employee walking through her office break-room. Noticing a bowl of Lucky Charms on the table she helps herself to a bite and is suddenly transported to a lush, beautifully animated 3D forest – complete with rainbows of swirling Lucky Charms cereal pieces around her. As she savors her first bite, Lucky appears uttering his famous catch phrase ("they’re always after me Lucky Charms"), and snatches the bowl of cereal from her hands. 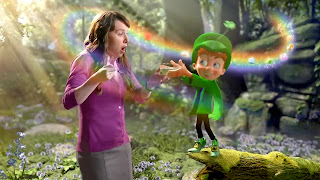 Just as quickly as she got there, she’s transported back to the office, saying to herself "I forgot how good these taste." The last embers of her journey can be seen in the form of pixie dust emanating off the spoon in her hand.

For Brejcha, the creative challenge was determining exactly how Lucky was going to interact with the live action.

"Historically, Lucky doesn’t interact very often with live action characters, and it was imperative to keep it true to the existing Lucky design," Brejcha says. "We spent a lot of time on the photographic details of the CG environment
and the coherent lighting of this world, because it was crucial that viewers believe that Lucky and this woman are in this world together – magical though it is."

Brejcha adds, "We approached the CG environment in a very painterly way, using gorgeous concept art to guide the feel of it.  Lucky’s animation was an amalgam of 2D drawings informing the CG animation, as we tried to keep Lucky as nimble and expressive as always."

About Calabash Animation:
Led by Creative Director Wayne Brejcha and Executive Producer Sean Henry, Calabash Animation, Inc. (www.calabashanimation.com) is the Chicago, IL-based animation production studio, known for its award-winning cel, 3D and stop-motion animation for the advertising and entertainment industries. Calabash Animation is perhaps best known for their creative development of some of America’s most beloved brand icons. In addition to working on some of today’s top advertising the company has also produced several acclaimed short films. It’s 2002 short ‘’Stubble Trouble’’ was nominated for an Academy Award in 2002. Its most recent "Botnik" will hit the festival circuit in Fall 2008.

BIGSMACK Brings On The Bling for A&E's "Duck Dynasty" Promo 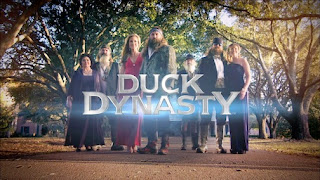 "Usually our work for an A&E targets a very broad audience, but this was all about reaching the dudes," Andy Hann, BIGSMACK's Creative Director says. "We wrote some lyrics, but honestly the funniest material came when we let rapper Kurt Hunte do some free-styling on his own."

The clever spot combines a classic hip hop groove and a fast cut music video edit to tell the "Duck Dynasty" story, which centers on The Robertsons, a newly-minted multimillionaire Louisiana bayou family living the American dream as they operate a thriving sporting empire manufacturing top-of-the-line duck calls and decoys made out of salvaged swamp wood.

Hann notes that this was one of those rare projects that actually benefited from having a quick turnaround - the project went from concept to final delivery within days.

"Sometimes quick projects like this can be creatively fun because you don't have time to over-think," Hann adds. "With more time and money, a simple yet effective idea like this might not have made it up the ladder."

We are more than 100 strong, occupying creative and production space in New York and Philadelphia.

We sport the latest technology in our 15 AVID/Final Cut bays, four audio finishing and recording suites and eight Smoke/Inferno/Lustre workstations.