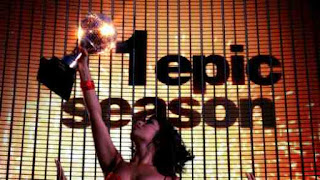 Beautifully photographed and featuring some equally impressive 3D animation and compositing, Fries says the goal behind the campaign was to try and reach a younger, hipper audience without turning off their loyal viewers. That meant taking ballroom dance away from its theatrical roots and shaping it into something more cinematic.

“This is the biggest season ever of Dancing With the Stars -- featuring a live premiere event, bigger stars on the show and a new elimination format -- so ABC challenged us to take this campaign to a much more epic place,” Fries says.

The Leroy and Clarkson creative team responded with the Duel in the Desert -- a trailer-like promo that captures the scale and drama they were looking for.

Set to a dramatic score by music house Musikvergnuegen, Hollywood, CA, the spot begins with a shot of a brilliant sunset and a slow motion shot of a silhouetted man and woman strolling confidently toward the camera. Their destination: a shiny black stage, surrounded by huge LED screens, scaffolding, and a cheering audience of thousands. As the silhouetted couple takes the stage, we see other couples size them up warily. Suddenly the competition begins and the couples exhibit their best moves. Using a variety of lenses, frame rates and tracking shots, Fries’ camera captures all the sultry moves in vibrant 35 mm detail. As 3D animated embers cascade on the LED screens, the spot comes to a climactic end with the woman in red hoisting the coveted trophy high above her head.

For Fries, one of the primary challenges was dealing with the environmental conditions -- namely shooting physically demanding choreography under a 110-degree desert sun on a lit, black stage. “It was important that we minimize everyone’s time out in the sun,” Fries said. “We had to be very economical in terms of how we used the talent so they would last the entire day.”

Equally important were the visual effects, which included the 3D animated LED screens and scaffolding. These are also used throughout the season in a comprehensive toolkit that carries the look and feel for episodic promos.

“I didn’t want this to feel too theatrical and synchronized like a musical,” Fries says. “We wanted it to feel raw and explosive. That gave us the emotion and action of a more cinematic style.”

Fries adds, “This was one of those projects where every facet of Leroy and Clarkson was tested -- from creating the concept to mounting a complex live action production through the intricate post process. And all of this for one of the biggest shows on television.”

Based on the response from ABC -- who has made the promos and graphics a key part of the Dancing With The Stars website as well -- it’s clear this promo campaign is as big a hit as the show itself.

About Leroy and Clarkson:
Leroy and Clarkson (http://www.leroyandclarkson.com/) is a creative agency, a design studio and a production company fluent in brand identity, promotional campaigns and graphic design. We are writers, designers, directors, editors and producers with the ability to develop and execute everything from simple title design to large-scale, brand-level campaign work.
We bring an emotionally engaging and narrative-driven approach to our projects. Our clients are networks, agencies and filmmakers looking to take their projects in new, culturally informed and creative directions.

Web Resources:
Click here to watch the Dancing with the Stars promo:
http://www.leroyandclarkson.com/mov/83.mov

Click here for more info about Leroy and Clarkson:
http://leroyandclarkson.com/

Click here for more info about Dancing with the Stars:
http://abc.go.com/shows/dancing-with-the-stars