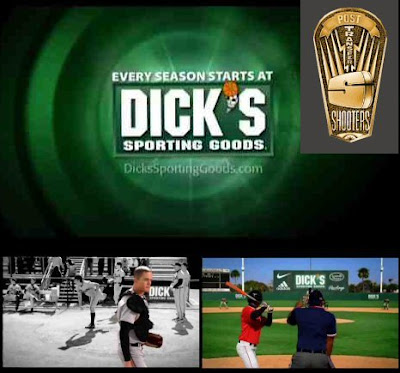 PHILADELPHIA, PA - Shooters Post & Transfer (http://www.shootersinc.com) was the post-production hero of "Be The Hero," a new HD spot for Dick's Sporting Goods stores, directed by Peter Odiorne of production company Sleeping Tree Films, Ardmore, PA and New York. The new spot began airing nationally this month.
"This spot was a lot more complicated then one might think at first look," says Mark Farkas, Shooters director of post production/senior editor. "It's essentially two different sequences, shot at separate times with different frame-rates and film-speeds. It required some precise planning to pull off, as well as some intricate compositing and rotoscoping work."


"Be The Hero," created in-house by Dicks Sporting Goods, centers on a confident looking catcher, seen in full color, moments before a big game. We see him stride purposefully in slow motion from the clubhouse to behind the plate while around him is a swirl of fast-motion action as his teammates, seen in black and white, get ready for the game. A voiceover, delivered like a pep talk from an unseen coach, captures the drama in reverberated tones: "who is going to be the hero tonight? Somebody has to make a play to make a difference. Be the one. Make that difference," as specific products from Rawlings, Nike and Adidas worn by the black and white players appear in color. The spot ends just as the catcher gets into position behind the plate, and full-color suddenly fills the screen for the first time as the ump yells "Play Ball." From the perspective of behind the plate we see the entire baseball field, with the Dick's Sporting Goods logo, as well as others like Nike and Adidas, adorning the centerfield wall.


The last image we see is the created end tag, appearing as a mysterious green vortex of baseball imagery -- in the center are the words "Be the one" followed by the Dick's logo.


"Dick's to their credit wanted to do a spot that was creative and conceptual," Odiorne says. "Dick's wanted to capture that pre-game moment all great athletes have where they are intensely focused. They wanted to talk to athletes in a powerful way."


Although Odiorne comes from a postproduction background, he knew this spot was fraught with potential problems and asked Farkas and editor Chris Magliozzo to be on set during the shoot to answer questions and troubleshoot any potential problems.


"I've been a director long enough to know that things sometimes go wrong on even the tightest-run productions, I wanted a little insurance and having Chris and Mark on set was key to that," Odiorne adds. "They spotted several things during the production that saved us a ton time and money."


To create the effect of the two simultaneous moments happening at different speeds, Odiorne shot the hero catcher against a greensceen at faster than normal frame rates -- ranging from 40 to 90 fps (frames per second) -- thus giving the appearance of him moving slowly compared to the shots of the other players around him that were shot at a traditional 24 fps. In post, the footage of the catcher was rotoscoped out and composited into the shots of the other players, to complete the effect. In addition to the main composites, the spot also highlights four distinct pieces of equipment, which appear in color while players themselves remain in black and white. The effect was created by rotoscoping the equipment, coloring it and compositing it back into the original scene.


"This one of those projects were some math was involved," Magliozzo says. "Because of the various film speeds we needed to specifically map out the screen times so that when we got to post everything would sync the way Peter envisioned it."


For senior producer Wade Echer, getting involved before the camera rolled was key "It is always was good to be part of the process early, everything fell into place as planned during post. Could we have pulled this off without our involvement in the planning? Of course, but it definitely wouldn't have been as smooth a process as it turned out."


This spot is another illustrative example of the Shooters 'boutique facility' philosophy centered on operating like a boutique in terms of talent and the creative process, but also having the technical advantages, efficiencies and horsepower of a facility. 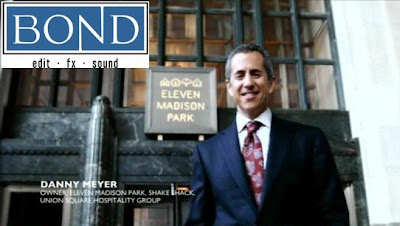 New York, NY - For Jeff Beckerman, Creative Director of BOND (http://www.bondedit.com), the full-service post house featuring creative editorial, finishing, design/motion graphics and audio post, 2009 will likely be remembered as the year the RED Camera truly came into its own as the go-to production tool for commercial production. Further evidence of that is found in the new six-spot campaign for New York's French Culinary Institute (FCI), created by Fly Communications, New York. The campaign marks the fifth RED Camera project BOND has posted, and further solidifies the company's reputation as the premiere post house on the East Coast for RED Camera projects.

The FCI campaign, edited by BOND's Gustavo Bernal and directed by Fly's Ben Cruz and Hernan Otano, features restaurateur Danny Meyer, owner of the Union Square Cafe and 11 Madison Park among others, talking directly to the camera about the personal choices he made that led him restaurant success and how important is to have an industry education. Intercut with his testimonial is a montage of shots of life inside his restaurants - from the waitstaff to the bar to inside the kitchen.

For Bernal, the challenge to this project was not the use of the RED Camera, but rather RED plus several other formats including time lapse photography shot at 10 frames per second, jpegs from a digital still camera and XD Cam. Making all those different formats work together in a seamless way proved a painstaking process.

"We needed to make everything look like the RED footage," Bernal said. "We designed a proper workflow and the DP did a very good job, but there were many inconsistencies between the footages in terms of light and contrast, The XD Cam footage always seemed to look a little greenish, for example. Plus, all of the footage had different aspect ratios, frame rates, color schemes, etc. It was a painstaking process involving essentially a different color correct for each format that all had to match the RED. Adding to the challenges was that we only had a few weeks to produce all six spots. It was daunting but we did it, and through it gained even more insight into RED and why we see it as a total game-changer in the commercial production and post."

"While many post houses are beginning to dabble in the 'science' of RED, BOND has already put five RED based projects under its belt and we are extremely up to date on the detailed complexities of post production with RED and its related software," Beckerman said. "Our understanding into the RED process is so deep that we have collaborated with both RED One and AVID to fine-tune the current version of the RED/Avid workflow."

Few design studios can boast the kind of relationship nailgun* shares with the HGTV network. Over the last year nailgun* has created numerous show opens/show packages, promo campaigns, toolkits and other design elements for their top shows, including three seasons of Dream Home – their tentpole event show that gives away a million dollar home. Their latest collaboration is the show open/show packaging and promo campaign for Dear Genevieve, which features the well-known interior decorator, Genevieve Gorder.


”We initially did the show open/packaging and they loved our take on the show so much they asked us to handle the promo campaign as well,” Michael Waldron, nailgun* Creative Director, says. “They wanted the promo to feel like the show package with a lot of different environments and a natural, eclectic mix of colors. We also incorporated a modern, contemporary look to be balanced with the earthy personality of Genevieve.”

The essence of the package was to present Genevieve in a personal way. The show is centered on Gorder offering down-to-earth advice to real people who have fallen out of love with their home. In each episode she delves into the gallery where viewers from HGTV.com have uploaded their design issues. Instead of just writing back with a suggestion, Genevieve provides the answer -- in person.

“She is one of those designers who gets right in there, she gets her hands dirty,” Waldron said. “She is not like ‘here is my sketch, go make it.’ We took her unique personality, which is very down-to-Earth, and blended it with a modern look.”

In the promo Gorder talks directly viewers about their home and asks them to email her their problems. Behind her a blend of 2D and 3D animation appears, including an invisible hand writing a letter to Gorder and illustrating furnishing ideas like couches and lamps.

“We put together the different layers to craft a stunning but simple package to reflect the essence of the theme,” says nailgun* Director of Editorial and Animation Erik van der Wilden.


About nailgun*:
With a strong belief that great art derives from making creative choices and sticking to them, veteran graphic designer Michael Waldron and editor/animator Erik van der Wilden launched motion graphics house nailgun* (www.nailgun.tv) in 2003. Since then the BDA Gold award-winning creative shop has been pushing boundaries while exceeding client goals with standout work for top advertising agencies and broadcast networks. Their clients include such companies as HBO, HGTV, ESPN, National Geographic, Crispin, Porter + Bogusky, Publicis and McCann-Erickson NY and Ogilvy & Mather.