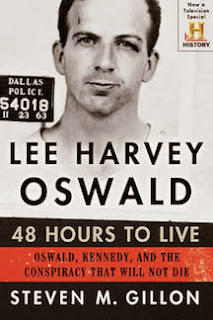 NEW YORK, NY – While there is no shortage of media coverage surrounding the 50th anniversary of the assassination of President Kennedy, few look at it from the perspective of Lee Harvey Oswald: 48 Hours To Live, a two-hour special premiering Friday, November 22 at 10 p.m. on HISTORY® featuring audio post/sound design by HOBO Audio.

“This is not a traditional documentary – the film’s dramatic re-creations and cinematography make for very compelling viewing,” says Howard Bowler, President of HOBO. “The challenge for us was to find the best moments to amp up the tension, and conversely, to know when to let other moments breathe. This, like our other work with HISTORY, is very rewarding thanks to the quality of their productions. It’s an honor to be a part of such a finely tuned storytelling process.”

Directed, produced and written by Anthony Giacchino (based on the book by Steven M Gillon), Lee Harvey Oswald: 48 Hours To Live is a minute-by-minute account of the final two days of Oswald’s life – his attempt to flee, his capture by the police, and the grueling interrogation by the Dallas police detectives prior to being shot by Jack Ruby – a chapter of history that raised more questions than it answered.

The production stands out as the first documentary to tell Oswald’s story by filming inside the Dallas Municipal Building, where the old Dallas Police Department was housed.  It’s also the first film to accurately portray Oswald’s interrogation inside Captain Will Fritz’s actual office.

Working with music licensed from the Extreme Music catalog, Chris Stangroom, HOBO’s Senior Audio Engineer, headed the audio mix for the film, which included sound design, audio clean up of archival footage and ADR. For Stangroom, the key to the project was finding ways to match the powerful visuals shot by Giacchino.

“The film is so inspired visually, with moody re-creations of pivotal scenes and dramatic slow-motion footage that heighten the tension,” Stangroom says. “I felt I had to raise my game with the sound.”

For Giacchino, this project represents the fourth consecutive film he’s entrusted to HOBO, and it looks like just the beginning.

“Music and sound is such a big part of any film, and HOBO has great creative sensibilities -- they never push it into cheesy, over-the-top ways,” Giacchino says. “I trust them and their audio judgement immensely.”


About HOBO Audio:
HOBO is an audio post production company dedicated to creating an exceptional listening experience. The company has earned the trust of some of the most iconic brands and companies in the world. Make yourself at HOBO.