NEW YORK, NY -- Oink Ink, the leading agency specializing in the creation and production of award-winning radio ads, announces the call-for-entries for this year’s Dead Radio Contest, the annual contest now in its 13th year honoring the best radio ads that we’re never produced. The deadline for this year’s entries is May 22, 2010 with the winning script to be selected in June. The winner will receive an all-expense-paid trip for two to Oink Ink’s production studios in New York or Venice, CA, to attend the recording session.

The popular contest offers frustrated copywriters across the country the chance to submit their best un-produced radio scripts that have been ''collecting dust since their untimely deaths,'' says Dan Price, Oink Ink president.

A precursor to some very high-profile recognition, the contest has given a second chance to many first-rate scripts. In fact, six of the past winning spots convinced previously doubting clients to change their minds and broadcast the once dead work. Each of those spots ultimately went on to find success at numerous national and international awards shows, including Radio Mercury, Cannes Lion, Clio and London International winners.

Last year Dead Radio top honors went to Neil Blewett of the agency ZIG, Toronto, for his IKEA spot ''Morning Face,'' which features ‘Linda from HR’ who, to the horror of her office, traipses around with ‘morning face’ – something you get when you don’t sleep well. The Swedish announcer reminds us that “It’s called beauty sleep for a reason” as the spot goes on to promote Ikea’s Sultan Mattresses.

Blewett’s win marked the third victory in four years for writers from Toronto. ''I couldn't believe it at first,'' said Blewett of winning. ''I went from writing a spot that I felt really good about. To feeling disappointed when it didn't get approved. To crossing my fingers when I entered the contest. To being anxious when I heard I was a finalist. To doing arm pumps when I got the call that I won.''

''We believe in the spirit of great writing and great radio,'' adds Price. ''There’s a lot of good ideas out there; some of which never see the light of day. The contest is our opportunity to breath life into an idea that maybe should have been breathing all along.''

The contest also serves as a reminder to the marketing industry at large about the power of radio advertising, which is enjoying a renaissance lately.

Besides Oink Ink’s own recent growth, which includes new studios in mid-town Manhattan, new hires and a recent ‘top-track’ pick by Shoot magazine, a recent article in Advertising Age noted: ''double-digit increases in national and local spot buys among top marketing categories such as entertainment, financial services and automotive…And several analysts peg radio to finish 2010 with year-end revenue that is flat or even 2% higher than last year, which would mean the industry's first year-over-year gain since 2006.'' 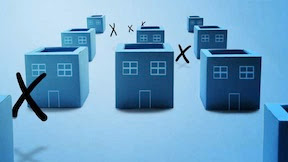 ''It was an enormous project -- absolutely the biggest I’ve ever worked on,'' Gary Resch, Senior VP, Executive Creative Director at DraftFCB, says. ''We’re essentially speaking to every person in America and its territories, and all ethnicities. We had to make sure the messaging was consistent, but also recognize that what’s right for one group might not be right for another.''

Yu adds, ''There was a very specific message that the U.S Census Bureau needed to communicate: encourage people to fill in the form and mail it back. The solution was a very direct message and execution that even a four-year-old child could understand.''

Through five :15 TV spots, the census form comes to life. In what look like paper cutouts, elements of the form get up and move across the blue and white landscape of the mailer. ''The shape of the Census form envelope is like an arrow,'' Yu explains, ''The shape of a roof -- on a hospital, a school or a house -- is also like an arrow. These components give you something that’s very clever, intelligent and smart. It doesn’t look like a generic motion graphics spot because we used the actual form to give vitality to the graphic instead of relying on a computer graphic. We created the animation using stop motion – it looks like paper. It’s borne out of the story and the content.''

The arrow, used throughout the multi-media campaign, becomes a device as elegant and clear as international signage leading the viewer through the specific stories of the spots. Boxes, dots, punctuation marks and letters on the form become whatever the message dictates. In one spot, ''Ten Years,'' the form springs to life as a blue border becomes the arrow showing viewers precisely where to go on the document. The number ‘10’ becomes a clock counting off ten minutes and boxes become buildings that jump up on the landscape. The voiceover narrates the journey with: ''When you take ten minutes to answer ten questions, your local community gets what it needs for the next ten years.''

Another spot, entitled ''Schools,'' the x’s used to fill in the form become adorable x-figure schoolchildren with their own personalities, jumping into a schoolhouse made with the arrow that leads viewers through the story. One x is a disappointed child until the schoolhouse expands to allow more children inside.

In yet another spot, ''Roads,'' the x’s are cars traveling down streets as the arrow splits and morphs itself into a mélange of highways. The x-cars find themselves in a tangle of traffic. The VO asks, ''If we don’t know how many people there are, how do we know how many roads we need?'' The spot resolves with x’s chugging down the roads at a comfortable clip. Each spot is a visually striking, compelling tale with a beginning, middle and an end -- all in 15 seconds.

''How do you take a government form and turn it into something engaging?'' asked Resch. ''That’s what Garson and the yU+co team did, using the actual form itself.''

Yu says, ''Our challenge was to make it fun to fill in the form, which in the past has been seen as a turn-off. Now, the form becomes something appealing.''

Keeping the arrow as a unifying theme, yU+Co’s mnemonic branding devices come in two phases -- one calibrated to launch 2010Census, and one to unveil in the middle of the campaign. In developing the first one, Yu and his team went to the source: the envelope one uses to mail back the form. In crystal clear blue and white, the animated visual is simple and direct. While the partner agencies’ commercials are varied, layered and relevant to the cultures they speak to, the yU+co end tag element ties them together.

Phase two of the mnemonic development is a companion end tag. At this point Census workers will go door-to-door to collect information from households who haven’t mailed in their form. This tag begins with the shape of the arrow and then animates into a house with a door, which opens, accompanied by the line ''Open Your Door To Our Future.'' And, again, the end tag has to work across all languages, boundaries and cultures.

Coordinating the work from the partner agencies was complex. ''It was quite a maneuver to mobilize that amount of people,'' Kelly Fagan, DraftFCB executive producer, says. ''The way Garson has set up the company, everyone has to perform on an extremely high level. First there was the work itself -- it had to communicate not only in TV but it had to work in outdoor, print and online, as well. But then there was the additional challenge of having to accommodate the many different languages and cultures. At the same time, executing the production had to be considered every step of the way. It all had to work cohesively.''

Carol Wong, yU+Co executive producer, says, ''One of the many challenges in designing a graphic sequence that would accommodate any of the 28 different languages is that most of the translations required longer text to communicate the same message. We had to also consider languages, which read from right to left or used characters instead of letters. From a production point of view, it had to be very user-friendly so that all of the teams could incorporate our graphics easily within their spots. Whether that involved slight variations on transparency, text size, length or speed of animation, we worked closely with each agency to provide a unique graphic for each individual need, while still maintaining the integrity of the core brand imaging and message.''

''We weren’t sure what to expect in the beginning,” Wong adds. ''It’s a lot of creative chefs to work with. But all in all, it turned out to be a fantastic experience. Each team was very collaborative, working together to brand one strong message that would work for each of the different ethnic communities.''

''In advertising, you don’t have the opportunity often to work on something that has that intense a positive impact, without the consumer having to buy something,'' Fagan says.

''We were fortunate to be a part of this project. It’s our way of giving back to the community,'' Yu adds.

About yU+Co:
Recognized as an industry leader in visual design and motion graphics with offices in Hollywood, Hong Kong, and Shanghai, yU+Co. (www.yuco.com) specializes in digital content for all media platforms as well as for title design for film and television, visual effects and animation, theatrical logos, game cinematics and commercials. For more information, contact: Dianna Costello for feature film and television projects or Michael Bennett for gaming/game cinematics and commercials at 323-606-5050.

Click here for more info about yU+co:
http://www.yuco.com
Posted by Ray Ecke at 5:28 PM No comments: Links to this post