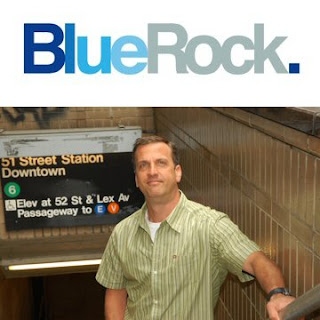 "For me, it was just the right time to make a change," Ashkinos said. "At BlueRock I can focus only on creative issues and what I need to do I make whatever I’m working on better."

"Bruce’s passion for the art of film editing and storytelling is inspiring," Roe Bressan, BlueRock’s President/COO said. "We’re excited to add his energy and focus to our creative roster."

Known for his sure-hand in an array commercial genres, particularly comedy, dialogue/storytelling and real people, Ashkinos’ current show reel includes spots for Champs Sports, Optimum/Cablevision, I Am.com, Wendy’s, as well as a European spot for Chipita baked snacks directed by Tony Kaye. Since joining BlueRock he has completed a new package of Optimum/Cablevision for agency Gardner Nelson + Partners, New York; and an effective PSA for Diabetes via McCann-Erickson, New York.

Looking at the big picture of the commercial production/post industry today, Ashkinos noted how well BlueRock is positioned to meet the demands of an ever-changing media industry.

"Editors In today’s marketplace need to look ahead for their clients more than ever before and offer creative options across multiple media platforms," Ashkinos explained. "Thanks to BlueRock’s unique relationship with their partner companies -- Spontaneous for design/visual effects/3D; Blast for full service audio post production; Contagious for digital marketing services; and Ballistic, for compositing, scene enhancement -- there literally isn’t any aspect of the filmmaking process we can’t creatively wrap our arms around. I’m looking forward to contributing to their already impressive reputation."

About BlueRock:
BlueRock (www.bluerockny.com) was founded on a simple but compelling editing philosophy -- that the talents of the editor and his or her vision, judgment and skills should be allowed to influence, inform and improve every aspect of the production process. Serving the needs of the advertising, television programming, music video, feature film and interactive media industries, BlueRock is known for its hallmark combination of creative talent and technical prowess. Its ad agency client list includes such shops as BBDO, JWT, McCann Erickson, Publicis Groupe, Young & Rubicam, and many others. Its editors possess a broad range of talents and styles, and their work has been recognized with AICP Awards, AICE Awards, Emmy® Awards, ANDY Awards and Clios.

At the PROMAX|BDA Design Awards, host and 30 Rock co-star Judah Friedlander got off many hilarious jibes at the design industry -- "I guess you guys are going to go home and blog tonight. Probably spell out 'boob' on your calculator." And while that maybe true, there's no denying the great work on display in the Grand Ballroom of the New York hotel.

Between bits of bruchetta and sips of acceptable red wine, the design community turned the spotlight on itself. Some of the standouts included the Comedy Central 'Indecision 08' promo campaign from my friends at Royale, the FX 'Dirt' image spot produced by all-around-cool-chick Michele Maples and her company Aresenal; and my personal favorite Spike TV's Star Wars promo campaign. Darth Vader on a golf course = always funny.

The complete list of winners is here: http://www.promaxbda.org/awards.asp?n=09bdadesign
Posted by Ray Ecke at 7:52 PM No comments: 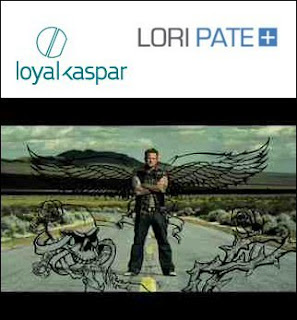 On The Road With "Tattoo Highway"
"Tattoo Highway" takes tattoo reality television on a road trip with master tattoo artist Thomas Pendelton. Pendelton and his business partner and wife Monica have transformed a 1970s tour bus into a tattoo parlor on wheels, featuring a swanky interior and top-of-the-line tattooing equipment. It's a tattoo shop that can tattoo anyone, anywhere.

For the image spot, Herbruck and Baudenbacher traveled to picturesque Lancaster, CA to film Pendelton, using the state-of-the-art digital RED camera system, standing in the middle of a desert road and talking directly to the camera about his life as a tattoo artist and his motivation for taking his work on the road. Swirling around him as he talks are a series of highly-detailed tattoo art that was first hand-drawn on paper and later scanned and animated using Flash.

"The goal for this project was to introduce the show and Pendelton to viewers," Baudenbacher says. "We wanted to capture his intense personality and get a sense of who he is and how passionate he is about tattoos and their meaning to people. For the tattoo art, it was crucial that we use illustration to capture all of the subtle imperfections that make them so powerful. Digital is too perfect to create realistic-looking tattoo art."

"It's a short, but definitely effective piece," says Elliott Chaffer, Creative Director at Loyalkaspar. "We wanted to give the look a personal touch, almost like a quick documentation of the spring break experience."


Set to a driving electronic beat, the screen is separated into four vertical blocks, each displaying a closely related, yet slightly different series of images (featuring shots from noted fashion photographer Neil Stewart), all backed by a brilliant blue sky. One series of stills shows a blonde beauty in reflecting sunglasses tilting her head back toward the sun. Another shows a young man grinning happily while overlooking the ocean. In the last one, a woman and a smiling couple all glow with anticipation, which quickly gives way to a rowdy beach crowd waving their arms in the air. At center screen, and bridging the four vertical blocks, is the MTV "Spring Break '09" logo.

"In assembling the imagery in four parts, we actually removed some frames to give the scenes a jerkier look," Daniel Dornemann, Loyalkaspar's Art Director/Designer, explains. "The low-tech feel accentuating these beautiful color burns gives the entire piece a vibrant, fashionable party look."


While everyone liked the idea of the handmade, four-part look, selecting the appropriate imagery was another story.

"We provided a number of possibilities to MTV, and to their credit they went for the most stylized concept," he says. "Selecting just the right images to open the spot took a good deal of collaboration. In the end, everyone was pleased with how it turned out."


About Loyalkaspar:
Recognizing that the process is often more rewarding than the end result is just one of the ways design house Loyalkaspar (http://www.loyalkaspar.com) distinguishes itself from the creative herd. Founded by directors David Herbruck and Beat Baudenbacher, Loyalkaspar has quickly earned a reputation among advertising creatives and network producers as a creative hub where daring creative and innovative execution intersect. According to Alex Moulton, Creative Director and Partner at Expansion Team, Grey wanted the campaign to be as "pure" as the products themselves by finding songs that felt fresh and contemporary.

"They wanted a certain feeling of 'green-ness' in the music, but it was also important to find a lyric that fit but wasn't forced," Moulton says. "We went through a lot of tracks but kept coming back to this song, It just felt right from the first moment we played it against the rough cut. 'Turn Time Around' ended up being a perfect fit for the brand and the campaign."

About Expansion Team:
Expansion Team redefines how music can be created for today's media by building a bridge between the recording, TV, film and advertising industries. They know the importance of a successful brand message and focus on creating impassioned brand aficionados. Led by founder and creative director Alex Moulton and executive producer April Jaffe, Expansion Team is supported by an exceptional roster of talent; an international collective of award-winning producers, songwriters, DJs and remixers. Because they work in studios around the world, an additional network of top session players and vocalists have become part of their growing family. For more information check out: http://www.expansionteam.org. 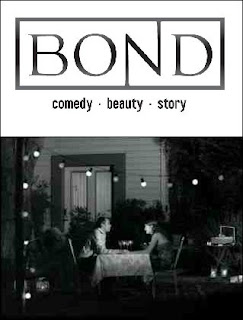 Rendered in cinematic black and white by director Reynal Gresset of production company Caviar, Venice, CA, "Learnings" depicts two versions of three distinct scenarios - each version has same emotional impact but slightly different. For example, the first vignette shows a large family hanging out in their brightly-lit living room. The next scene is similar except for one noticeable difference -- only one light is on. The second vignette depicts a couple dinning in a chic restaurant. In the next scene shows the same couple enjoy dinner, only this time from their home patio. The last scene turns the conceit on its head by showing the exact same scene in both - a family playing in a tree-filled park -- each with their own Sprint mobile device. The voiceover explains that you don't have to change anything to save money thanks to Sprint Family Data Plan.

"It was most important that viewers recognize the difference between each set-up, to get the message that people don't have to drastically change their behavior to still enjoy the things they love," Wainstein says.

"This was also an exciting project for me to work on because of the involvement of legendary cinematographers in my home country of Argentina, Felix "Chango" Monti. "He's extremely well-respected in Argentina and Brazil and I'm proud to have worked with him."

Garson Yu of yU+co Speaks at Flux/Watch the Titles Event at the Hammer Museum in L.A. 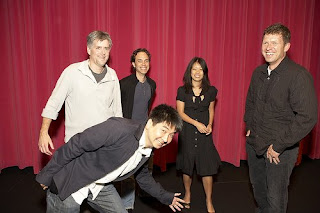 Really wish I could have been to this one... Two weeks ago Garson Yu of yU+co, along with Kyle Cooper (Prologue), Danny Yount (Prologue), Jamie Caliri (Duck) and Karin Fong (Imaginary Forces) spoke at the Flux/Forget the Film, Watch the Titles event at the Hammer Museum in L.A. More than 500 people attended – apparently that's 200 too many to fit in the Billy Wilder theater. The overflow crowd had to make due watch on a big screen in Hammer's outdoor courtyard. Not too shabs.

You can read the details here and here and check out some photos here. Plus my good friend Remco at Watch The Titles hopes to have video interviews with all five on his site soon. So be sure to look for it. We'll link to 'em here when we see them.

Promax|BDA has announced the finalists for the Design Awards. And not surprising it contains some brilliant work from best and brightest the industry has to offer. Definitely looking forward to seeing who takes home Gold.

FYI...Mind Guerilla will be bloging live from Promax|BDA June 16-18.
Posted by Ray Ecke at 3:02 PM No comments: