Never seen this technique before

HP - invent from Tom and Matt on Vimeo.

NEW YORK, NY -- Cause & [Effect] Productions (http://causeffect.tv), the two-year-old creative collective led by Executive Producer Jason Zemlicka and Editor Jamie Hubbard, has added noted Editor Jason Kileen to its roster of creative talent. Kileen, who is represented by Cause & [Effect] on a non-exclusive basis, and has worked with such top commercial directors as Joe Pytka, Spike Lee and Errol Morris, represents just one facet of the company's recent growth, which includes office expansion, additional staff and new technology investments.

"Today, clients are looking to work with companies that are versatile and can do more than one thing well," Zemlicka says. "They want creative partners that can play a key roll in every step of the process. That's what Cause & [Effect] is all about. We're perhaps best known for our editorial, but our clients come to us for design, 2D/3D animation, as well as writing and directing. Adding the talents of someone like Kileen brings that much more to the creative mix here. We feel fortunate to have someone as talented as Jason on our roster."

Cause & [Effect]'s full-service approach rang true for Kileen, a multi-talented editor who is seemingly comfortable working in any genre ñ including comedy, visual effects, and dramatic story-telling.

"I'm lucky to have been able to work on a wide diversity of projects, I just love the art of editing and always wanted to work on as many projects as I could, regardless of the genre," Kileen says. "When I first met Jamie and Jason, I immediately wanted to be a part of what they were building. I appreciate Cause & [Effect]'s agile approach to the changing atmosphere of the industry."

Kileen comes to Cause & [Effect] following three years at post house PS 260, where in addition to numerous high-profile ads, he co-edited the indie film "On The Road with Judas" which premiered at the Sundance Film Festival in 2007. Prior to PS 260, Kileen was with post house Go Robot. He began his career as an assistant at Slingshot (now known as Chemistry), Lost Planet and Crew Cuts.

"Jason has an amazing eye and an intrinsic understanding of the editing process and what needs to be done when looking at a cut," Hubbard adds. "It's something that's hard to teach, it's just a sense you have and Jason definitely has it."

Some of his best-known spot work includes ads for M&M's, IBM, Heineken, Bacardi, the NY Knicks and Morgan Stanley.

In addition to adding Kileen, Cause & [Effect] recently expanded their space taking on additional square footage inside their west 27th street loft space. They have added another editing suite, several graphics workstations and administrative offices and personnel.

About Cause & [Effect]:
Cause & [Effect] is a full service creative boutique led by Jamie Hubbard and Jason Zemlicka. Their collective backgrounds in writing, directing, editing and FX provide the foundation for creatively solid spot production. A ten-year film and television veteran, Jason has written, directed and edited for PBS, IFC, TechTV (now G4), produced marketing campaigns for advertising and broadcast clients and helped to redefine Nickelodeon's on air image. As a Producer and Editor Jamie has worked in-house for several creative studios as a member of brand-building teams for clients such as HGTV, TLC, VH-1 and Playhouse Disney. He's written and edited everything from traditional 30 second spots, to award winning short films, to long-form integrated marketing content. Cause & [Effect] understands that industry and ecology are inherently connected. That's why they donate 1% of revenue to the environmental organization 1% for the Planet (http://onepercentfortheplanet.org/en/). 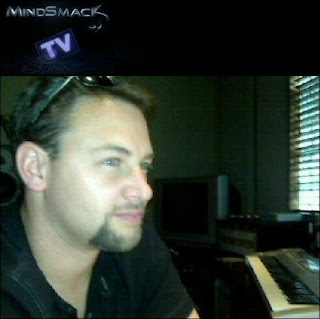 Award-Winning Audio Talent Joins Full-Service Post House/Web Development Company
NEW YORK, NY - Brian Rund, the award-winning audio engineer/sound designer/composer, has joined the creative staff of MindSmack (http://www.mindsmack.tv), the full service post house for advertising, television and film featuring state-of-the-art editorial, graphics, audio post, as well as web design and multimedia development.
"Very few audio engineers can do it all, but Brian is definitely among that elite group that can," Todd Feuer, President of MindSmack. "The industry is all about talent now and Brian is the best mixer I've ever worked with. He is an amazing audio engineer, as well as a top sound designer and composer. We feel lucky to have him aboard." Feuer founded MindSmack with his brothers Mike Feuer and Sam Feuer.

Rund began his career in 1992 at Random Bus\Pink Noise, the audio divisions of the now-defunct editorial house Dennis Hayes & Associates. It was there Brian gained a passion for sound. His credits there include spots for Sony, Diet Dr. Pepper, Dockers and more. Rund's studio shelves are lined with multi awards, including BDA/Promax (World Gold), Tellys and Aegis awards.

Rund explained that his decision to join Mindsmack was based solely on the company's forward-thinking business model that emphasizes a boutique studio environment, explorations into developing its own original content and its frequent collaboration with the web development side of the company whose clients include Citigroup, Doritos, American Express, Pepsi and the U.S. Marines Corps. In April 2009, MindSmack was rated number one on TopSEO.com's list of Best Web Design Companies.

"It's an understatement to say the industry is changing -- today companies need to embrace change, not merely be resigned to it, and that's what I love about what Todd, Mike and Sam are building with MindSmack," Rund says. "They're open to new ideas and have access to opportunities that I want to be involved with. I'm excited to be a part of what they're building here."

Since joining MindSmack Rund has been involved in numerous top creative assignments, including the SyFy network rebrand, as well as projects for Sundance Channel and a new spot for Puma via agency Syrup.

When he's not in the studio, Rund entertains kids in the tri-state area in the band Baze and his Silly Friends. Their video is set be released on HBO Family in June of 2009. 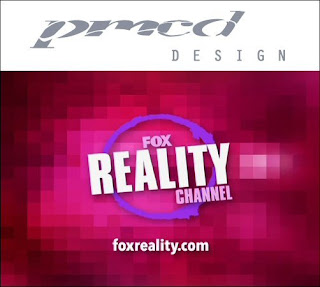 "Since their programming is extremely varied -- everything from American Idol Extra to Solitary, an endurance-based reality show," Patrick McDonough says. "Creatively it was crucial that we address the RFP to find a way to connect all of these shows and brand them as Fox Reality Channel Originals, as well as provide a visual toolkit"


Brilliant in its simplicity, the pixelation concept represents one of Fox Reality Channel's largest strategic branding efforts to date, giving them a truly identifiable look for their original content that, according to Lorey Zlotnick, Senior VP of Marketing and On-Air Promotions for Fox Reality, will serve as the visual core for network originals. .


"In order to create a sense of environment and link all these shows together, we needed to create a branding campaign with an umbrella look to pull the wide depth and breadth of our original programming together," Zlotnick said. "With so many challenges including a wide range of viewing options, program repurposing where viewers can see the same show on a variety of networks and new ways to consume media; it was essential to create a graphic package that truly interacts with our content and we can own. The pixel package does just that and more and if viewers watch closely, they will get some additional visual surprises.


PMcD Design Creative Director Josh Lynne initially conceived the pixilation concept, recognizing it as a constant visual element seen in most reality shows. And, thanks to its reveal/conceal nature, it opened a lot of creative doors, providing a seemingly infinite number of ways to incorporate it into the network's on-air look.


"Pixelation is prevalent in most reality shows, but we took it further by adding different elements and intricately weaving it into an overall look," Lynne said. "We took something pretty rudimentary and took it to artistic levels."

Since the package's launching with the new season of the show Solitary for on air, print and digital, the network has called on PMcD Design to adapt the look for other network projects. 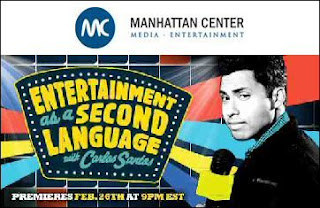 NEW YORK, NY - "Entertainment as a Second Language with Carlos Santos" (E.S.L.) is the newest breakout show for MTV Tr3s. Bringing together the best of Latin and American cultures, "E.S.L." has made Manhattan Center Productions, in the heart of New York City, (http://www.mcpstudios.com) (MCP) their broadcast production home base.

"As with all of our productions, the difference that ‘E.S.L.’ experiences at MCP is the high level of service that we provide," says Marvin Williams, Director of Video Engineering and Operations for MCP. "Whether it’s for a national cable network like MTV, a local broadcaster, or a corporate project, in HD or SD, our staff is committed to making everything move as smoothly as possible."

"E.S.L." on MTV Tr3s is an hour-long, bilingual, bi-cultural variety show featuring performances from today's biggest music artists and interviews with the most talked-about celebrities in movies and television. Packed with entertainment and comedy, Carlos Santos presents comedic sketches with his humorous take on current events, hot topics, music and pop culture.

Conveniently located less than a block from Madison Square Garden and Penn Station, MCP is home to an expert staff and three TV studios, an HD post division, a pair of world-class audio recording facilities and Manhattan Center’s renowned venues The Hammerstein and The Grand.

TV1 is equipped for HD and SD productions of every scope, with nine Ikegami HD cameras, Canon lenses, two Stanton Jibs, and an Ikegami HD switcher among the long list of technical highlights. In addition to MTV Tr3s’s "E.S.L.", MCP’s studios have also recently been host to such productions as the YES Network show "CenterStage" and NBC’s "Law and Order: Special Victims Unit".

"MCP provided the high level of support that MTV TR3S required to make ‘E.S.L.’ work," says Sara Morrow, Director of Production for MTV TR3S. "They’re extremely accommodating and the midtown location made things very easy for our cast and crew and most importantly, the fans that come out every week."

As MTV Tr3s and "E.S.L." have discovered, MCP speaks their language when it comes to accessing comprehensive broadcast production and elite service. "We’re glad to have the opportunity to make shooting right here in midtown Manhattan easy for MTV Tr3s," Marvin Williams concludes. "Everything they need is right here."

All referenced product names are trademarks of their respective owners.

Click here for more info about MTV Tr3s and "Entertainment as a Second Language":
http://www.mtvtr3s.com/ontv/dyn/esl/series.jhtml