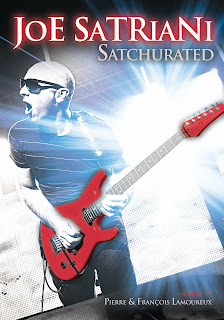 Joe Satriani, widely recognized as one of the world’s top guitarists, has added to his legacy with the release of the new live-concert film, "Satchurated: Live in Montreal." The HD film was authored for both 2D and 3D Blu-Ray release by DuArt, NYC’s full-service video and audio post facility.

Filmed by GRAMMY and EMMY award-winning concert filmmakers Pierre & François Lamoureux of Cinemusica, Satchurated was captured live during Satriani’s “The Wormhole Tour,” supporting his studio album "Black Swans and Wormhole Wizards" at the Metropolis in Montreal, Canada. "Satchurated: Live in Montreal" was released to select theaters throughout the country for a limited engagement in March.

Cinemusica captured the sold-out concert with a total of ten camera positions, recording Satriani’s musical best in both 2D and 3D HD formats, in 7.1 Surround Sound.

Randy Hudson, Director of Digital Media Post Production for DuArt, oversaw a meticulous 3D Blu-Ray authoring process at DuArt’s advanced facilities in midtown Manhattan. “This was an amazing project, and well deserving of the level of production necessary for making it available on 3D and Blu-Ray,” says Hudson. “You have a front row seat to every chord change, played by one of the world’s undisputed guitar masters.”

“Over 5,000 retail DVD and Blu-Ray titles have been collectively authored by the Disc Production team here at DuArt,” Hudson explains. “That helps us to fully understand the workflow and the final product that we’re working toward: knowing the intricacies of 3D subtitling and menuing, advising the client on how to simultaneously set up to playback in 2D for checking text or credits, and myriad other details are all factors in delivering the best possible product to the consumer.”

The complete post offerings available in DuArt’s 12 floor building on 55th Street and 8th Avenue provided Cinemusica with additional important benefits. “Along with the video assets, we can also handle full QC of the audio in a surround environment,” notes Hudson. “All the services at DuArt are available to the client for a fast, complete turnaround, no matter what the format is.”

Posted by Ray Ecke at 5:21 PM No comments: Links to this post